The history of firefighting dates back to Ancient Rome while it was under the rule of Caesar Augustus. Prior to that time, there is evidence of fire-fighting machinery that was used in Ancient Egypt. One of these machines is the water pump that was invented by Ctesibius in the third century BC.

The History of firefighting in the UK

Before the great fire of London in 1666, a handful of parishes in the UK had started to organize a firefighting unit. After the great fire, the first fire insurance company was introduced by Nicholas Barbon. To reduce the cost of insurance, Barbon formed a fire brigade.

The private fire companies in London merged in 1833 and form The London Fire Company Establishment. It was after the Second World War that the National Fire Service was formed to support the local fire service.

The history of firefighting in the United States

Organized firefighting started in the US in 1631. Back then, the governor of Boston appointed 4 men as fire wardens. He empowered them to inspect chimneys and find violator to the fire prevention laws at that time.

Later on, the parliamentary representative of the town appointed 8 citizens to patrol the streets at night. If they see a fire, the men will quickly direct the people in the area to form bucket brigades.
In 1678, the first fire engine company was established and was captained by Thomas Atkins. The United States government had no control over the fire department until after the American Civil War. Prior to this time, private fire brigades were paid by insurance companies on the basis of the number of building they could save. This made them compete with each other.

Firefighting today is a far cry of what it was in the past. Crude tools and equipment have been replaced with high tech gears 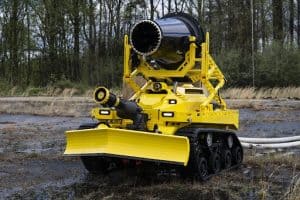 Training is now mandatory for fire fighters at every level and professional development is now encouraged in most departments. Firefighters are now being certified in many disciplines. In fact, some firefighters are specialist in two or more disciplines.

What the future holds for fire-fighting

With technology rapidly changing, it’s hard to imagine that thermal imaging cameras, drones among others are just the stepping stone of the development of the fire service.
As you may already know, fire service technology has changed drastically since the 1700s. Today, fire-fighters are forging through the flames with special gears and high tech equipment like thermal imaging cameras to help navigate through a burning building or area and drones to get a birds-eye view or sky perspective of an area.

With the changes technology is bringing in every other industry, one has to wonder what lies in store for the fire service in the future. Here is a glimpse.

In the future artificial intelligence is going to become mainstream. The TAF35 and TAF20 are doing their part to keep firefighters safe. These robots basically are extinguishing turbines that are outfitted with a powerful nozzle ring that atomises water to make a fine mist that can travel 70 to 90 feet. Despite the immense power of this robot, its mist posts no threat or harm to firefighters if they get sprayed.

Firefighters can now stay out of harm’s way by controlling this robot from a distance of up to 1640 ft.

The robot was first used by New South Wales firefighters in 2015. Their Emergency service minister said that the robots have been a game-changer.

Who would have imagined that bass could put out a fire? Two students

from the Mason University of engineering proved that this can be done.

The creation of Viet Tran’s and Seth Roberson uses a low-frequency wave to remove oxygen from the air. As the oxygen slowly reduces, the fire will dwindle and die.

Firefighting jetpacks is now a thing in Dubai. The water-propelled jetpacks where purchase in 2015 by the UAE.

With what is now called the dolphin method, firefighters use the water pressure from their jet ski to power their fire hose and jetpack. This way, the firefighters have easy access to boat, road, and shoreline fires.

To successfully put out a fire, you have to consider two important factors- the location of the fire and the fuel that is making it burn. There are several proven techniques for tackling a fire. We are going to be looking at each of them and when they are effective.

Here, water is aimed at the ceiling; the water slowly drops down and extinguishes the flame from above.

This method is effective in a closed compartment environment. Instead of attacking the fire directly, it is aimed at the wall or ceiling. This way, the water cools the ceiling and wall which interferes with thermal balance. The rest of the water, falls like rain droplets and gradually extinguish the flame.

This method involves the use of a solid stream of water and fog to fight a fire. Two teams are required to successfully pull off this technique. One of the team operates a high or low-pressure fog nozzle, while the other used a nozzle with concentrated steam. This technique is only used for fires that are subject to high winds.

This is perhaps the most popular firefighting technique. Here, streams of water are aimed at the base of the fire. In order for the technique to work effectively, fire firefighters must have a clear line of sight to the fire. If this method is used in a non-ventilated area, there will be less steam and the fire will die out quicker.

This technique is usually used in close compartment fires. Here, a fog nozzle is used to extinguish the fire. The technique is effective in a non-ventilated area.

This method is basically the combination of the direct and indirect method. The reason why this technique is so effective is that it simultaneously combats overheated gases while attacking the fire directly.

are equipments that are designed to put out fires. Some of this equipment can be operated by anyone or an untrained person at the scene of a fire. At the same time, there are others that must only be operated by a fireman.

Incorrect use of firefighting equipment can lead to serious injuries or even death.

Below is an overview of some firefighting equipment.

A fire bucket is a piece of simple firefighting equipment but it serves a very important purpose. The bucket usually has the word “fire” written boldly on it and is made of either plastic or metal.

It is can be filled with flame smothering powder or with water. To use, dump the content of the bucket into the fire and repeat the process until the fire is completely out.

should never be used to open a door or break a lock. It should be mounted to the wall at all times and should be checked by a service technician from time to time.

Most fire extinguishers are designed to deal with different fire scenarios. It can be filled with foam, carbon (IV) oxide, powder, or water additive.

When buying a fire extinguisher, it is wise you pick one that can effectively fight the fires that are likely to develop in your home or office.

These are used to smother small fires that start at home or place of work. White kitchen blankets are perfect for a caravan or a small kitchen.

A large workshop should have a large fire blanket (1.2m x 1.2m) in the event of an emergency

If you work in a place that stores flammable liquids, you will need an even larger fire blanket (1.8m x 1.75m).

This is a non-toxic powder that can effectively smother fires. A bag of Flamzorb can fill a ten litre fire bucket.

Whether you live in an average size apartment or a mansion, it is important that you have fire safety equipment with you. You can’t accurately tell when a fire will start. Having a fire extinguisher, fire bucket or fire blanket could save your life in the event of an emergency.

Keep in mind that things like fire dry risers, fire hose among others can only be used by trained a fireman.

Fires are categorised into five distinct classes, based on the nature of the fuel that is sustaining the flame.

This method of categorizing makes it easy to determine the best fire-fighting method and the right firefighting equipment to use.

These are the most common types of fire. They occur when combustible materials become heated to their ignition point. This type of fire is sustained by3 elements -oxygen, heat, and fuel. Materials involved in this category of fires are as follows- Plastic, paper, wood, rubber, textiles, and other inorganic based compounds.

Class A fires are easy to extinguish. Spraying it with foam or water will cool the flame, and reduce heat supply that makes the fire burn. Water-based extinguishers are the most appropriate equipment for putting out Class A fires.

Any Liquid that has an ignition temperature that is less than one hundred degree Celsius are classified as flammable liquids. These liquids have a very low flash point, meaning that they burn easily. The flashpoint of a liquid is the temperature at which the substance gives off a sizable amount of vapor to be ignited. Flammable liquids will burn at any temperature if there is a source of ignition, like a naked flame or a spark.

Some common examples of flammable liquids are as follows- alcohol, paints, petrol, and solvents. Fires that are fuelled by these materials spread very quickly and give a lot of heat. They also produce a toxic, thick, black smoke, which makes it difficult to extinguish.

. Using water to smother this kind of flame will cause the fire to spread and cause more damage.

Flammable gasses like petroleum gases, butane and propane have the ability to create a serious explosion if triggered by an open flame or a spark. This is the reason why flammable gasses are stored in sealed containers.

Fires involving flammable gasses are difficult to put out. Before attempting to extinguish a Class C fire, you should ensure that the gas source is isolated. Water and foam fire-extinguishers are not effective against Class C fires.

Dry powder extinguishers are effective against this type of fires.

Some metals can burn endlessly when ignited. Although a lot of heat is required to ignite most metals as they are excellent conductors of heat. Powdered metals pose a higher fire risk because they are easier to ignite especially when compared to solid metal.

Alkali metals like sodium, potassium, aluminium, and magnesium can burn when they come in contact with water and oxygen. Using foam or water to put out metal fires will only intensify the flames and may lead to an explosive reaction that will send debris of metal in every direction.

The safest way to address this fire is to allow it to burn itself out. Class D fires produce a lot of ash that eventually builds up and starves the fire of oxygen.

Class F fires which involve cooking oil and fats are very difficult to extinguish. Water and foam are not effective against it. In fact, water may make it spread quicker. The special fire extinguishers like these

have been developed to address this type of fires.