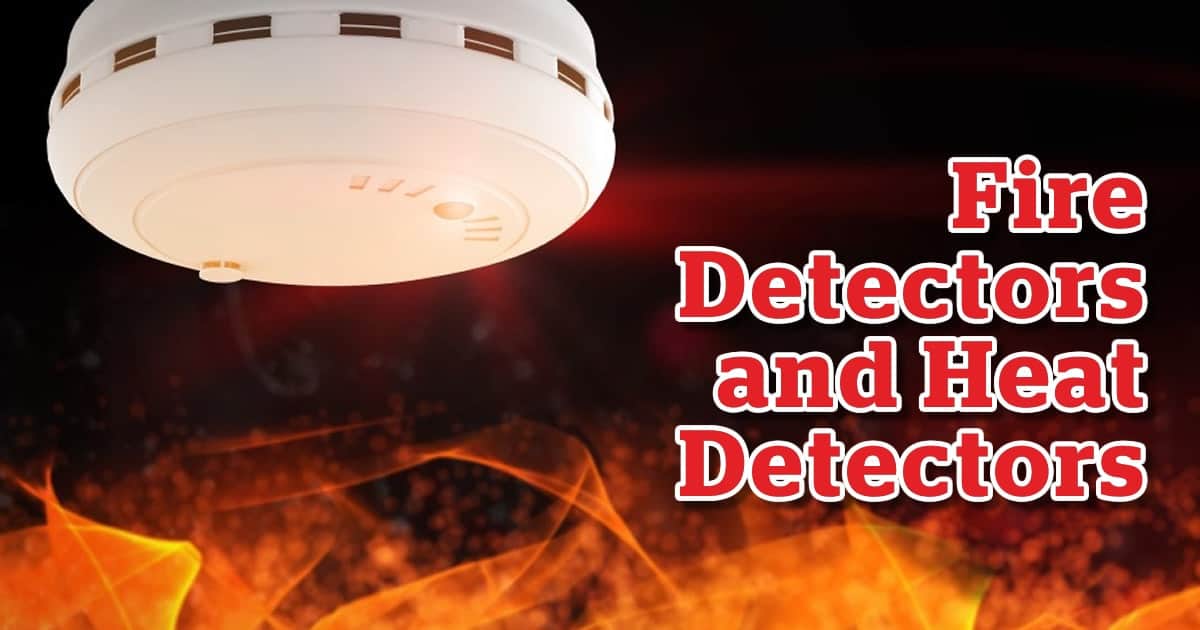 is critical for a successful fire fighting effort. There are certain areas where smoke detectors aren’t suitable, like an environment where there are too many airborne particulates due to moisture, temperature, dust, such as in garages, elevator machine rooms, warehouses, attics, and storage rooms.

In this article, we are going to be taking a close look at heat detectors with a view to learning what they are, how they work, how many types of them are available and the ideal place to install them in a home and office.

What are heat detectors?

, they don’t respond or trigger an alarm when there is a smoke. They are designed exclusively to save properties, not lives. Thanks to a heat alarm, you can get a little more time to put out a fire before it gets out of control or evacuates people from a building.

These are likely the most popular type of heat detector. They are usually installed in residential buildings, warehouses and large storage areas to reduce property damage in the event of a fire

. They are triggered when the heat sensitive alloy embedded in them reaches eutectic point changing from solid to liquid. The thermal lag delays the rapid accumulation of heat so that the fixed temperature device will reach its programmed temperature moments after the surrounding air reaches and exceeds that temperature.

The common fixed temperature point for most heat detectors is 136.4°F. Over the years, technological developments have facilitated the perfection of heat detectors that can activate at a temperature of 111°C, increasing the margin of safety and reaction time.

Rate-or-Rise (ROR) heat detectors are triggered when there is a sudden rise in temperature of 12° to 15°F per minutes, regardless of the starting temperature. ROR detectors can operate at a lower pressure fire condition. It has two heat sensitive thermisors. The first one monitors heat transfer by radiation and while the other responds to only ambient temperature. The detector triggers an alarm when the first heat sensing element temperature increases relative to the other.

ROR heat detectors may not be able to respond to slowly developing fire. To make them detect a low energy heat source, a fixed temperature element needs to be embedded in the device. How to choose between them

Heat detectors usually have a bold label on them that says- “not a life safety device”. The label or tag is attached to the device to notify users that heat detectors are not meant to be a substitute or alternative to smoke detectors

in the hallways or in the bedroom.

A heat detector will notify you of a fire in your laundry room, attic, garage and other parts of your home where smoke detectors shouldn’t be installed. As you probably know, there are different types of heat detectors; each has its advantages and shortcomings. So, it cannot be said that one type of heat detector is superior or should be used instead of the other.

For example, if one were to place a ROR (rate-of-rise detector) above an oven, every time the oven door is open the alarm in the device will be triggered due to the sudden heat increase. In this circumstance, the fixed temperature heat detector would be a better option. If a room loaded with combustible materials like textile or paint

, is protected with a fixed heat detector, then a raging fire can easily cause a thermal lag (due to the sudden rise in temperature). In this case, the ROR heat detector would be a better choice.

How a heat detector alarm works

The working principle of a heat detector is quite simple. You see, the device is embedded with heat sensitive sensors that trigger an alarm when there is a sudden rise in temperature. The sensory device may be a bending bimetallic strip or a low fusing alloy.

Depending on its construction, a heat detector alarm can be mechanical (mechanical alarms can either be bi-metallic or pneumatic) or electronic.

An electronic heat detector alarm has a thermisor which changes as the temperature increases.

Bi-metallic mechanical alarms have a special strip made of two metals. Pneumatic heat detectors consist of a small chamber filled with a movable diaphragm and air into which the chamber is seated. As the temperature rises, the air within the chamber expands and ultimately deforms the diaphragm. This in-turn triggers the alarm.

Heat detectors have dramatically evolved over the last couple of years. Rapid development research and the emergence of high-tech devices

and technologies have improved these detection systems and made them more sophisticated and efficient.

Heat detection technologies can be categorized into 4 types:

These are updated and modern version of the electromechanical line-type heat detector. Opto-mechanical detectors have special optic cables that are separated by a heat sensitive insulator protected by an outer covering. A light is passed through the optic cable. When there is a sudden increase in temperature, the insulator changes to a liquid state and cause the light beam to be distorted. This distortion is monitored by the heat detector device that set off the alarm.

The electro-pueumatic heat detector was made in 1941. These detectors usually have a narrow vented chamber that has a small diaphragm which moves when there is a sudden change in pressure according to the ambient (outside) temperature. If the ambient temperature rises quicker than the predetermined rate, the diaphragm slowly moves to complete an electric circuit which triggers the alarm. The reason why the electro-pneumatic heat detectors are superior to others and is therefore in high demand is that it can operate at a different temperature range.

This device has a special thermistor that serves as the heat sensitive element. A thermistor is basically a resistor whose resistance is triggered when there is a sudden change in temperature and pressure. These detectors can operate both as a fixed-temperature heat detector or a fixed ROR (rate or rise detector) depending on their construction.

Heat detectors are reliable devices especially when it comes to fire detecting fires. However, they are not categorized as life safety devices. Heat detectors are designed to be used to detect fires when there is a chance of fire trigger from heat and electromagnetic radiation.

Heat alarms are meant to be utilized in areas where smoke alarms cannot be installed. For example, attics might have excess dust particles or moisture; kitchens are often filled with smoke and so on. Installing a smoke detector in the aforementioned may not be practical especially from the standpoint of maintenance and may also cause false alarms.

It is wise to always remember that heat detectors aren’t made to save lives. They won’t go off unless something is burning slowly and generates carbon dioxide or smoke. Kitchens, electrical closets, attics and so on are facilities where heat detectors can be installed.

Before installing a heat alarm it is important that you think about the area you intend to use it. Consider factors like source of power, fluctuation of ambient temperature and whether you need a wired or a wireless device. Keep in mind that installation of a heat detector might not be enough to protect lives and that you need a smoke detector in or close to sleeping areas.

. Also, you have to learn how they work, the various models that are available and the right way to install them. Remember that heat detectors aren’t designed to save lives, so they should never be used as an alternative for smoke detectors.

Last but not least, learn how to evacuate from the fire scene the proper way in this article

should be your first priority!