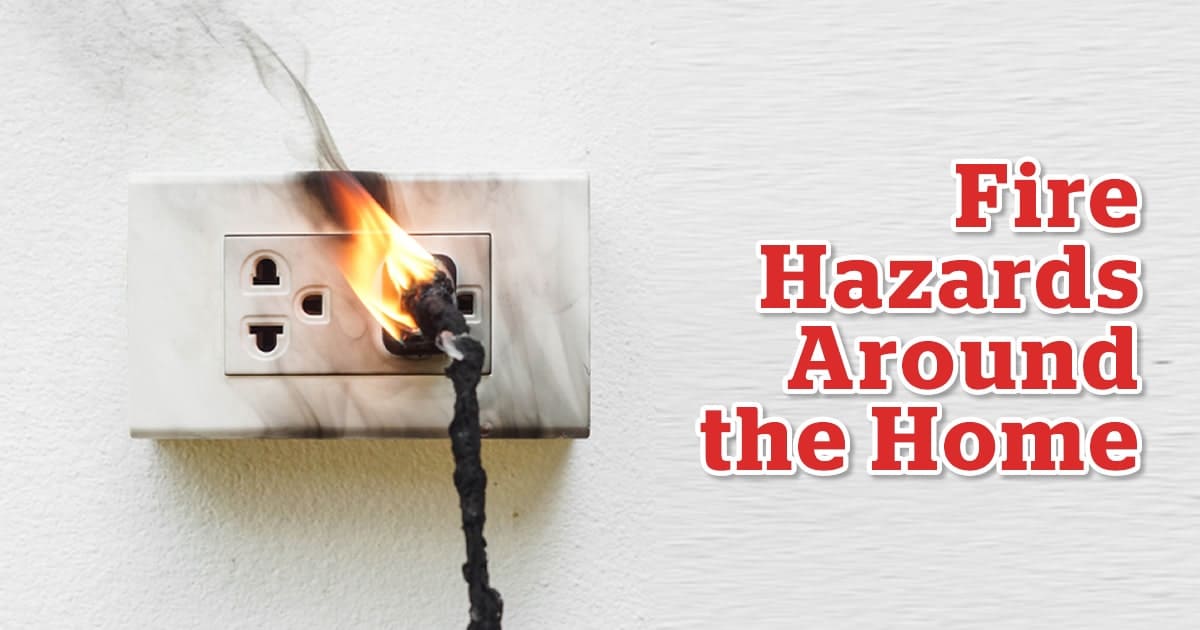 According to the National Fire Protection Association, more than 1.3 million fires were reported in 2014 in the US alone. Those fire destroyed properties worth 11.6 billion dollars, killed 3,275 and injured 15,775 people.

Fires can happen pretty quickly and cause serious damage to lives and properties. Unlike other disasters, home fires can be avoided. Most people associate home fires with the kitchen, but there are other potential fire hazards present in the home. To prevent your home from going up in flames, it is important that you learn how to access and address these hazards.

In this article, we are going to be looking at some common fire hazard in the home and some effective ways to address them.

Before we dive right into the nitty-gritty of this article, we are first going to be looking at the nature of fire.

The nature of fire

Fires can start in any part of the home, including the kitchen, bedroom, storage areas like store room, attic, workroom or basement. Causes of fires include sparks from the fireplace, cigarette ashes, overheated electrical wire, and unattended barbecues.

Fuel, like paper, rubber, wood or clothing (anything that is combustible) provides the energy the fire lives on. Oxygen, the air we breathe, is critical for the burning process to occur.

Heat serves as an ignition source just like a match or lighter. It also causes the continuous vaporization of combustible solids like wood. High molecular activity or intense chemical reaction is needed to keep the fire burning.

When a fire occurs, a chemical process known as oxidation and reduction, simultaneously take place. This chemical term means that fuel like plastic, paper are reduced in the presence of powerful oxidizing agents like oxygen among others.

Heat and fire cause the carbon molecules and hydrogen in wood to decompose and release energy in form of flame and intense heat. The wood slowly reduces and gives off hydrogen and CO2 into the atmosphere.

Cooking is a fun and relaxing task that often bring friends and family together, but cooking is also the major cause of home injuries and home fires. Being cautious and mindful while you cook can go a long way to prevent these fires.

Here is everything you need to know about kitchen safety.

According to a report from the NFPA (National fire prevention association), more than 33% of all kitchen fires that occurred between 2010 and 2015 are linked to unattended cooking. Walking away from cooking equipment that is in use or turning your attention away from it for a while to talk to a family member of check your phone can be catastrophic.

Although the NFPA didn’t release any official statistics linked to frying, they still pointed out that frying dominates the kitchen fire problem. Be very careful any time you want to fry food because hot oil can catch fire and spread easily. Throwing water on a grease fire will only make things worse. The safest way to put it out is to cover it with a fire resistant material.

According to the NFPA Less than 1% of all cooking fires that occurred between 2010 and 2015 stated with the ignition of clothing. In fact, articles of clothing are normally not the first thing to catch on fire during a kitchen fire accident. But then, clothing is to blame for a good number of kitchen fire-related deaths.

Two third of the kitchen fires that occurred between 2010 and 2015 are linked to the ignition of food, as reported by the NFPA. As you probably know, some food will catch on fire easily than others. Most kitchen fires start shortly after food goes up in flames.

As you now know, kitchen fire can start for a good number of reasons. Taking your eyes off a pot or a frying pan on the stove can turn to into a tragedy.

The best way to prevent smoking-related fires is to quit smoking for good, but if you are someone who won’t quit and really want to reduce the risk associated with the practice, read on.

For smokers that don’t want to quit yet, vapes (e-cigarettes) are a much better option. Dropping a vape on an armchair or carpet won’t start a fire. So if quitting the habit isn’t an option for you, then it is best you swap your regular cigarette for an e-cigarette.

Most Electrical fires occur in the winter month between December and January, due to the continuous use of light and heating appliances. Some electrical fires happen because of appliances failure, problems with house wiring and mistakes by homeowners.

Common causes of the electrical fire

Portable space heaters with heating coils can cause fires when placed close to combustible materials like clothes, rugs, and curtains. The heat generated from the coil in the heater can easily ignite a flammable material.

Old wiring can sometimes cause electrical fires. If your home is over 15 years old, its wiring capacity may not be able to comfortably handle the increasing amount of appliances in modern homes, such as video game consoles, flat screen TV, computer, air conditioners, and microwaves.

The work of a breaker is to prevent overload caused by too much electricity. A new breaker can do this perfectly. Old and outdated breakers, on the other hand, may not be able to because their connectors may have worn out or may not be working at all. This is ultimately going to cause the entire system to overload and start an electrical fire.

Outdated appliances that have damaged plugs, frayed cord, or that doesn’t meet modern safety standards are one of the major cause of electrical fires. Old appliances use more power than modern outlets can handle. Frayed or damaged cords can easily heat up and ignite combustible materials like curtains and carpets.

Register your gadget and appliances

On average, the success rate of electrical appliances and product recall in the UK is between 10 and 20 percent. Most times, manufacturers aren’t able to directly contact those who purchased their product. So, millions of potentially unsafe appliances are in use in home and offices, putting their owners at risk of fires, electrical shocks or even death.

When you register your product, it will be easier for the manufacturer to contact you if there is a problem.

Time is of essence especially when it comes to in-house fires. A fire can become life-threatening in less than 2 minutes. An entire home can become engulfed in flames in less than five minutes. To prevent this, it is important that family members and homeowners become conscious of the common home fire hazards like faulty wiring, smoking in bedrooms, candles and so on. Save your loved ones the trouble of dealing with a fire at home, and the fireman from risking his life running into your apartment by applying fire safety tips discussed in this article